At the end of my blog, I will share the things I did well and the not so much!

This summer I headed to the Canadian Arctic via Montreal, northeast to the Inuit town Kuujjuaq near Hudson Bay and then onto a float plane 100 miles west to Lac Dufreboy. Here on Lac Dufreboy, I had a gnarly and somewhat amusing introduction to the Tundra mosquito as my trip guide approached the aircraft with a hugely swollen right eye from the previous nights nasty bites!

I had done my research although I really could not believe they could be "that bad". Well they were. I was prepared for the attack of the arctic mosquitoes. My friend and veteran adventurer Jean, told me just how to avoid the horrible experience j my fellow travelers endured for days. I was bite-free!

The Tundra is massive area, a flat, barren, treeless,rocky wilderness where nothing really grows because of with a permanent frozen sub-soil or permafrost. During the short arctic summer, the frozen soil melts, leaving the ground very soggy. I imagine an area covered in marshes, lakes, bogs and streams. Plants grow on the higher ground in in bog areas  does take place are plants that  are short like reindeer mosses, a variety of wildflowers, grasses and ancient lichen that attach themselves to the rocks pushed millions of years ago by the arctic ice flow. And, for the first time of my life I experienced the taste of the purist water on earth and it didn't come from a bottle! It was the first time I had taken large cup, walked to the shore of the lake and drank it with with an incredible enjoyment. No boiling, no bleach and no bacteria... pure and clean arctic water.

The vast wilderness of the Tundra

My wild and vivid imagination had me tracking and photographing the elusive Tundra wolf or hours on end. The reality ... we searched, we heard, Each day, we took a little motorboat across the lake and walked through the marshes surrounded by swarming mosquitoes and black flies for hours to the location of "the wolf den" the guides said they discovered before our arrival.

However, my instincts told me otherwise. A single female wolf with a pup were seen entering the below ground den some 400 yards away. Yes, comparable to 4 football field. Merely a dot in my binoculars. For a photographer they could have been doing a wolf dance and were still beyond what I could do with my camera and lens.

We waited for hours hidden behind a natural blind and .... not a sign of a wolf. No one was home. Especially Mama and her pup.

After a couple of days, I made the choice not to revisit the den again and decided to go out on my own. I was finally alone and exploring the Arctic Tundra on my own terms. I probably had as much of a chance to see a wolf than the others who returned to the empty den back to the den to spend the night. I took my camera, a radio for communications, my compass and went off to explore the lake and Tundra hills on a beautiful summer day.  I came across an old caribou kill. Bones picked clean but the skull still had fur and there was white fur all over the kill site. And, then I sat down leaning against an ancient rock and nodded off for a summer afternoon nap!

The vast wilderness of the Canadian Tundra 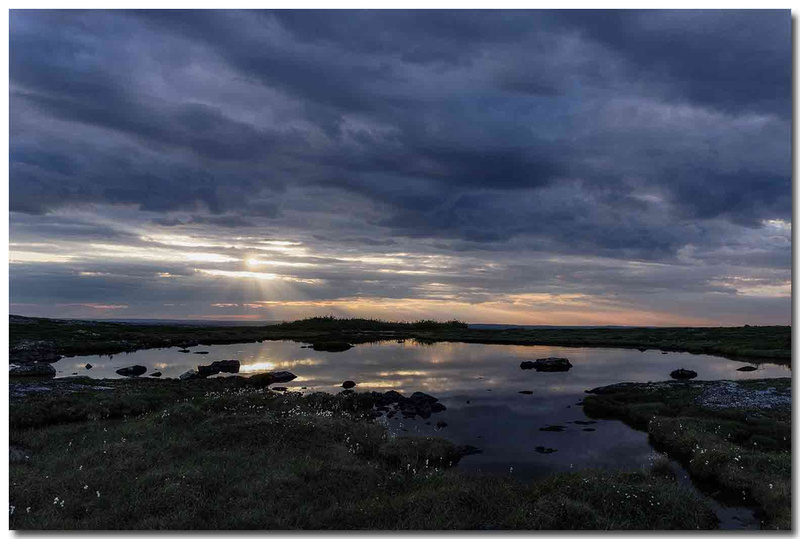 This is the start of your preparation after you have the clothes you plan pack. That includes everything you want think you plan to wear.  I created an outdoor wash-line and sprayed every bit of clothing, thermals, pants, tees, jackets, hats,sleeping bag, backpact and even my Pjs. Everything was saturated and left outside to dry.

Read more about this product on their website sawyer's permethrin and make your own decision. For me, it turned out to be my BFF against the meanist bugger in the tundra.

As a photographer, wearing a mosquito net over my face is a real pain. There were two short occasions where I had just had to wear one. My dearest friend, Jean Matusik suggested Ben's wipes. Yes, it does have 30% deet and I'm not a fan. However, she suggested that I tuck a wipe under my wooley hat. She told me not to use it as a wipe and so I did.

Neither product prevented mosquitoes from swarming around me but they never laid a bite. The Ben's wipe did save me wearing that darn net over my face. It made the photography part much easier. Ladies, if you have acrylic nails, the Deet melts the product and makes it sticky. I will know better next time. You can buy them most anywhere.